Here's another Harvest Monday update from Eight Gate Farm. We are still in a drought, which means the chore of watering has gotten burdensome. I never set up the automatic drip irrigation system this year, which I'm regretting now.

We had a number of first harvests this week. We harvested the entire crop of Red Norland potatoes. It was disappointing, about a third of what we got last year. The plants started out strong, but weakened as we got into summer. Weak plants equals small harvests. At the same time we picked the first Fortex pole beans, which I planted adjacent to the potato rows. These also were a disappointment; this time because rabbits ate the plants, and they are only starting to recover.

We also picked the first cauliflower. This is Flame Star F1, that does not need to be blanched.

We got the first "saladette" tomatoes, i.e. bigger than cherry, but not as big as slicers. Here is Juliet. While I'm not entirely impressed with the flavor, its productivity and disease resistance keeps me growing it.

We also picked the first wax beans. Here is "Carson" on the left, with more pickings of Calima filet beans.

But the best was the first harvest of sweet corn. This is Illusion, a white-kernel synergistic hybrid. The flavor is outstanding! The local farm stand is now selling its sweet corn for $1.25 per ear. I can remember paying $2 per dozen, but that was a long time ago!

For a sampling of continuing harvests, here's the last of the Imperial broccoli heads, shown with another Flame Star cauliflower. 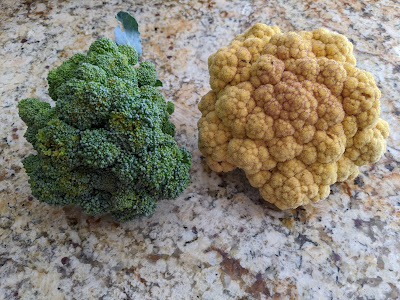 More artichokes, 10 or so this week. These were the nicest looking.

A few weeks ago we pulled all the garlic. They are now cleaned up and put into storage. From left, there is Katterman, Persian Star, German White, and Vietnamese Red. None are very large, but we should have enough to carry us through until next year's harvest.

Lastly, I've been regrowing the same turmeric plant for several years. In the fall I dump out the pot it's in, take the roots I want, and leave a few root pieces to regrow. This week I was surprised to see it gave us a gift, something that had never happened before.

That's it for this week. Thanks for reading, and thanks as always to Dave at HappyAcres.blog for hosting Harvest Monday.