Welcome to another Harvest Monday at Eight Gate Farm, brought to you by Daphne's Dandelions. This week I remembered to publish the post before I link to Daphne's page! Apologies to those directed to a stale posting.

Last week Daphne wrote that her harvests consisted of "beans and cukes, beans and cukes." This week ours were the same, if you substitute "zukes" for "cukes." I don't think she was really complaining, and neither are we. Here's a bean picking from earlier in the week: 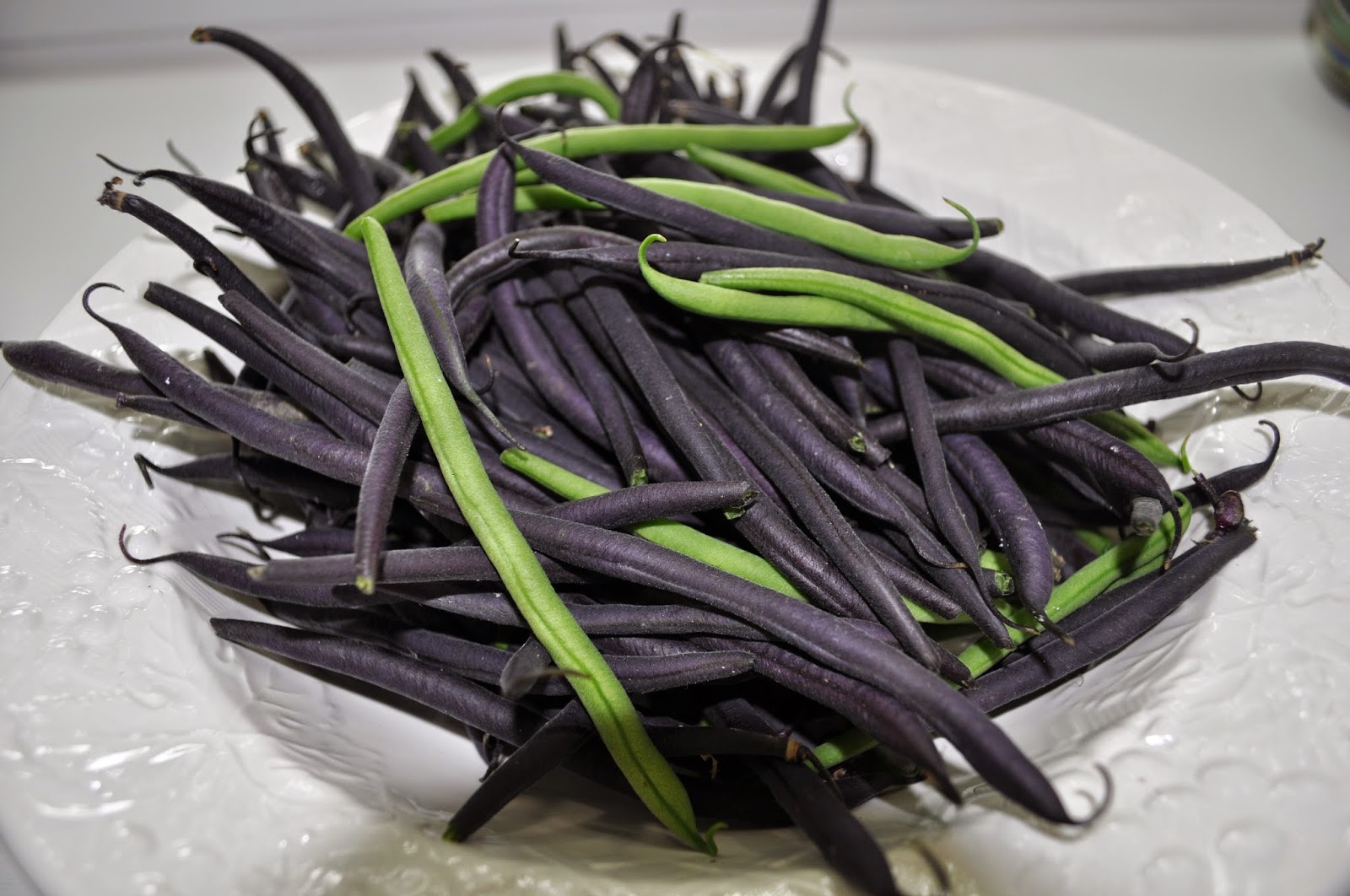 The green ones are "Denver" and the purple "Velour," both filet-type.

I traded some zucchini with a friend for some of her cucumbers. A good trade, as she isn't growing zucchini and our cucumbers are struggling.

We robbed 3 more "Kennebec" potatoes, weighing in at almost 2 pounds! 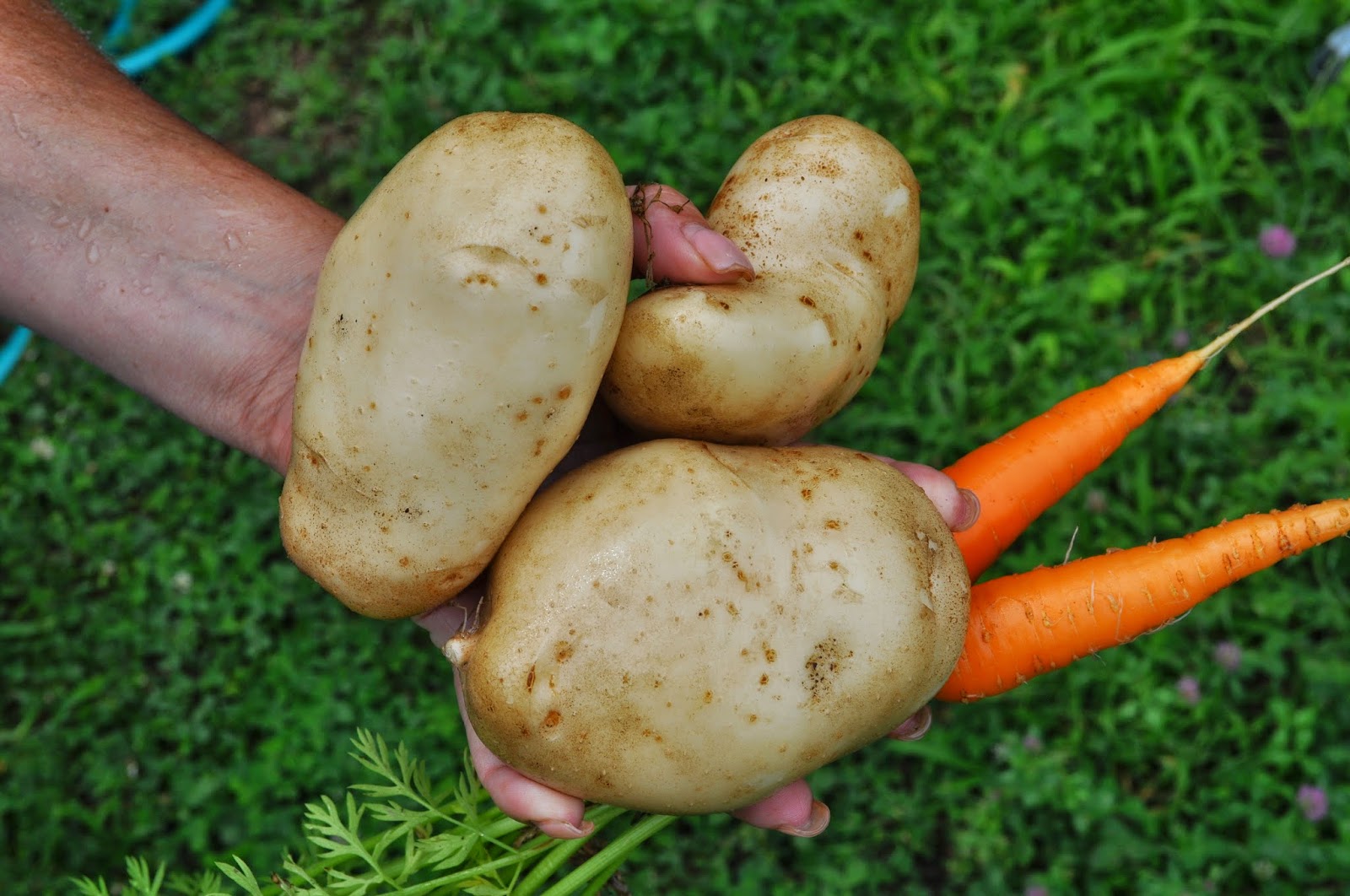 I've mentioned this is my first experience with potatoes. I was amazed at how well they seem to be growing here. But then I learned that the first potatoes grown in the United States were planted right here in my town in 1719. Must be the climate!

Blueberries were picking all week, but are now winding down. One batch went straight to this Rustic Blueberry Tart. Delicious! 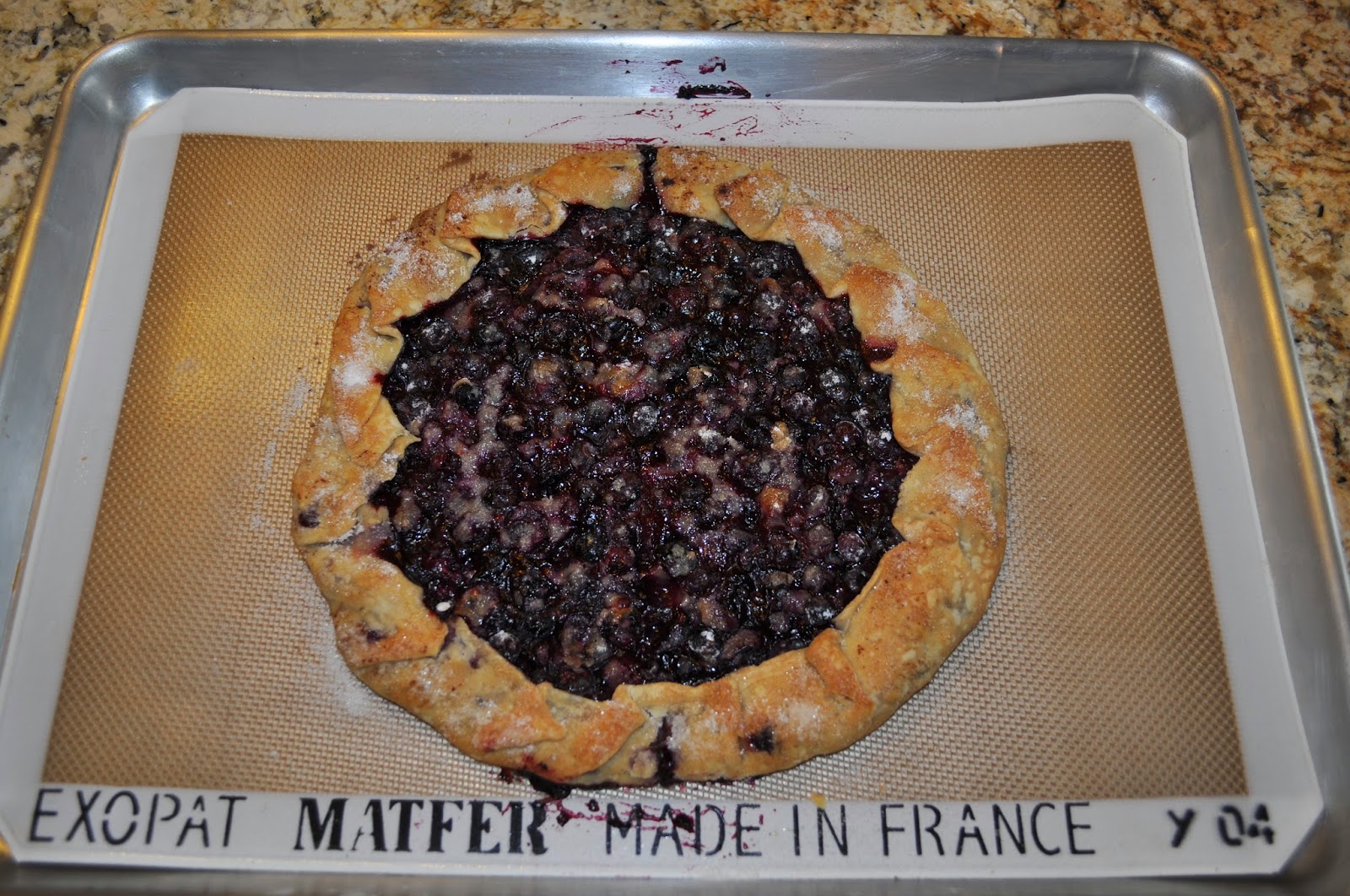 An end-of-week harvest of beans, grape tomatoes, a Pepper of Mystery, and an heirloom tomato "Caspian Pink." I've read that people pick heirlooms before they are ripe, and ripen them indoors for safety. We'll see. The Mystery Pepper was supposed to be Chocolate Bell, but I think something got switched at Fedco. 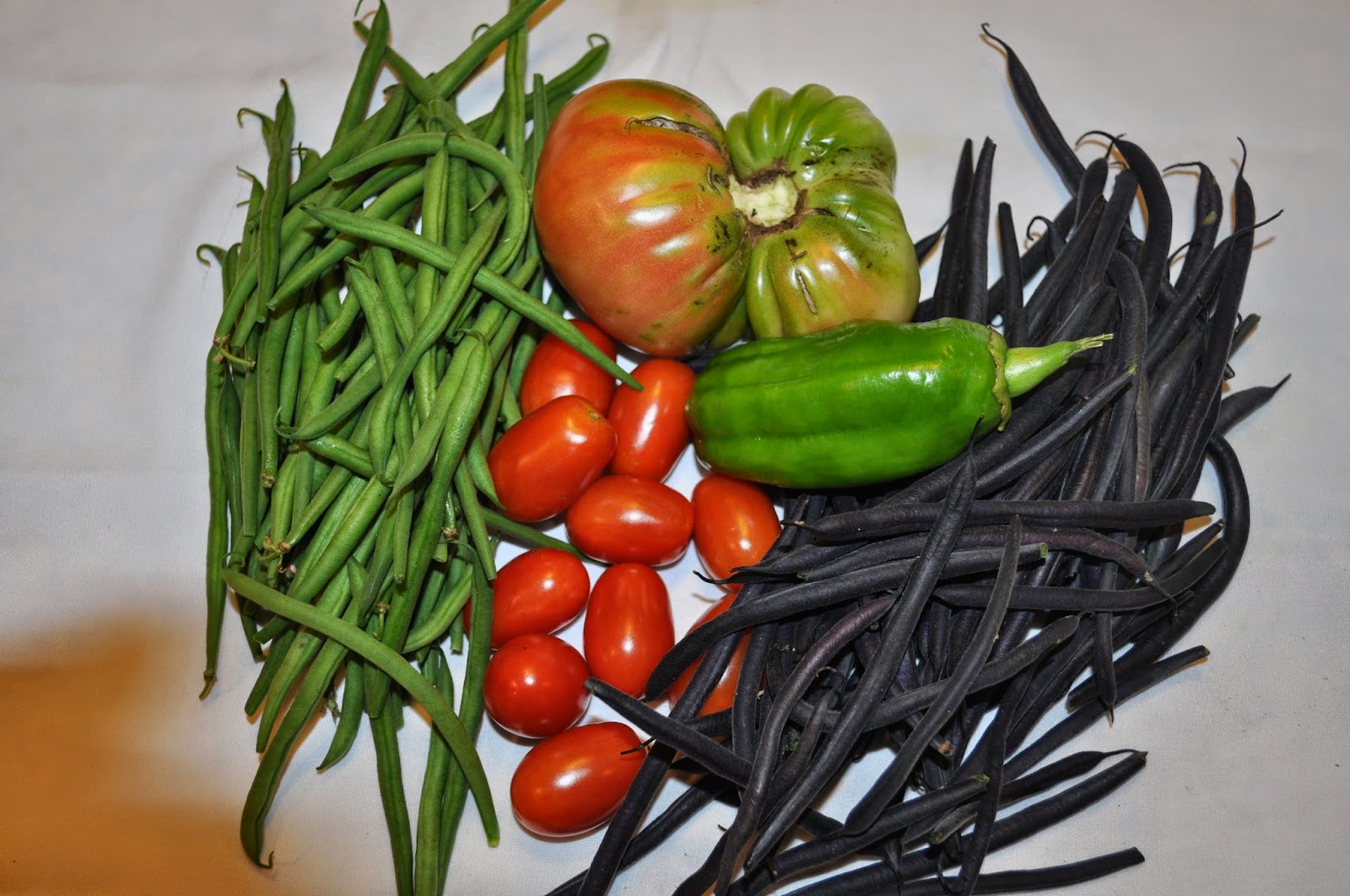 We picked another eggplant, but I neglected to photograph it before it started to become the main ingredient in Eggplant Parmesan: 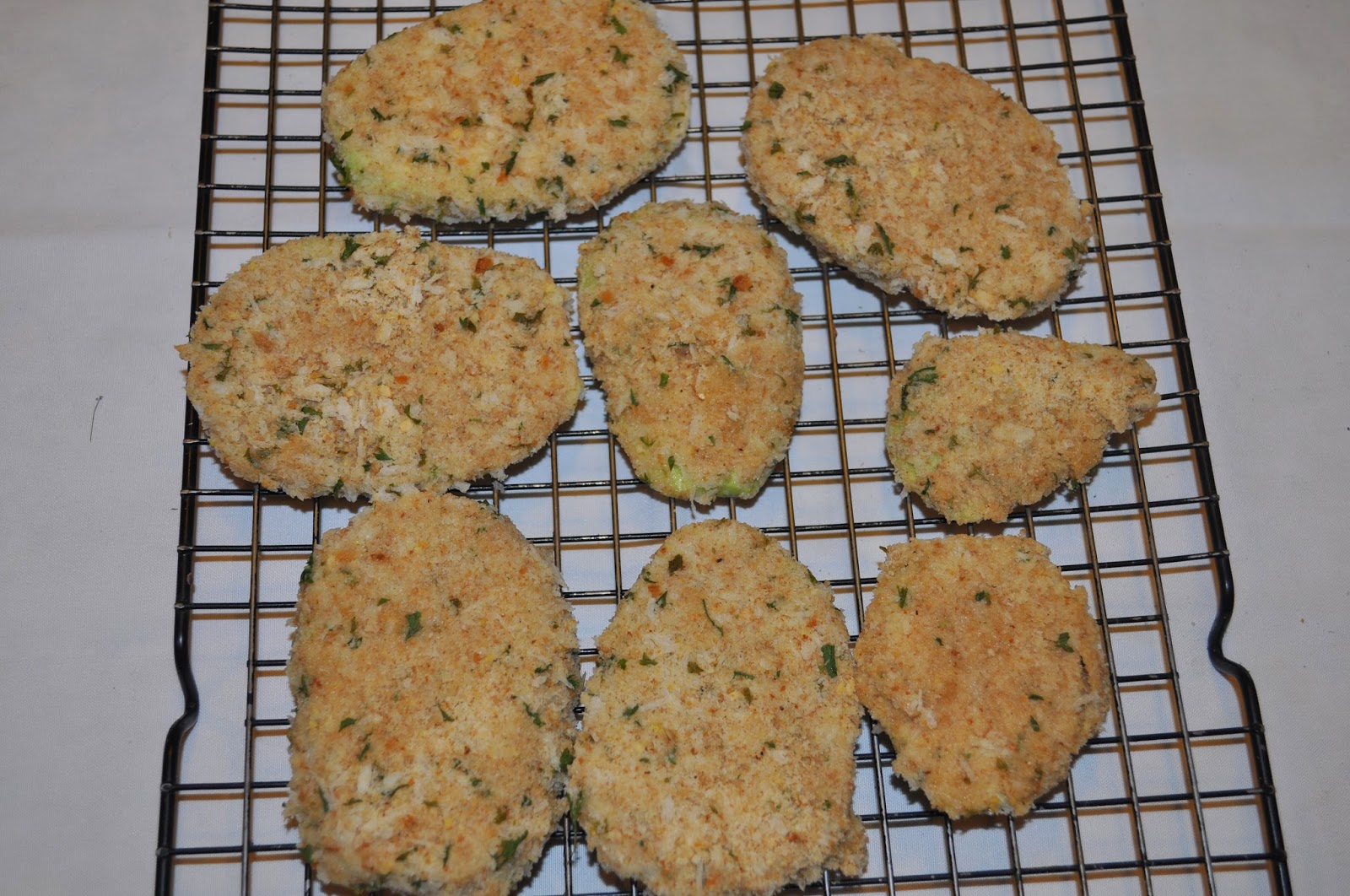 So I guess we're in the Summer Doldrums--where there isn't a lot of variety and the late-summer/fall rush hasn't started yet. So how about a check-in with "The Survival Garden," which I've written about here and then here? (You have to scroll.)

It's turned into a lush jungle that constantly amazes me. 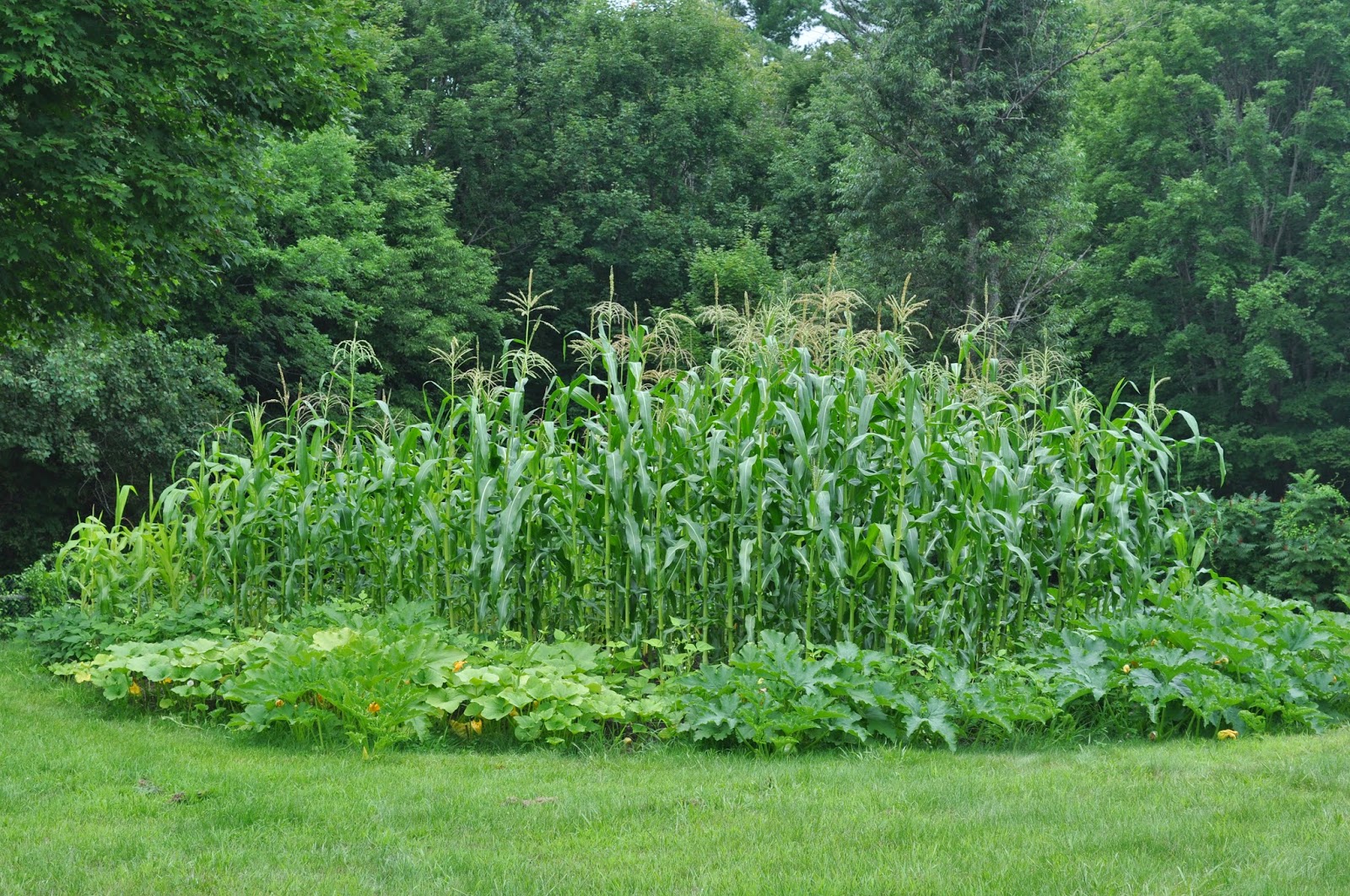 There are some basketball-sized pumpkins hiding. 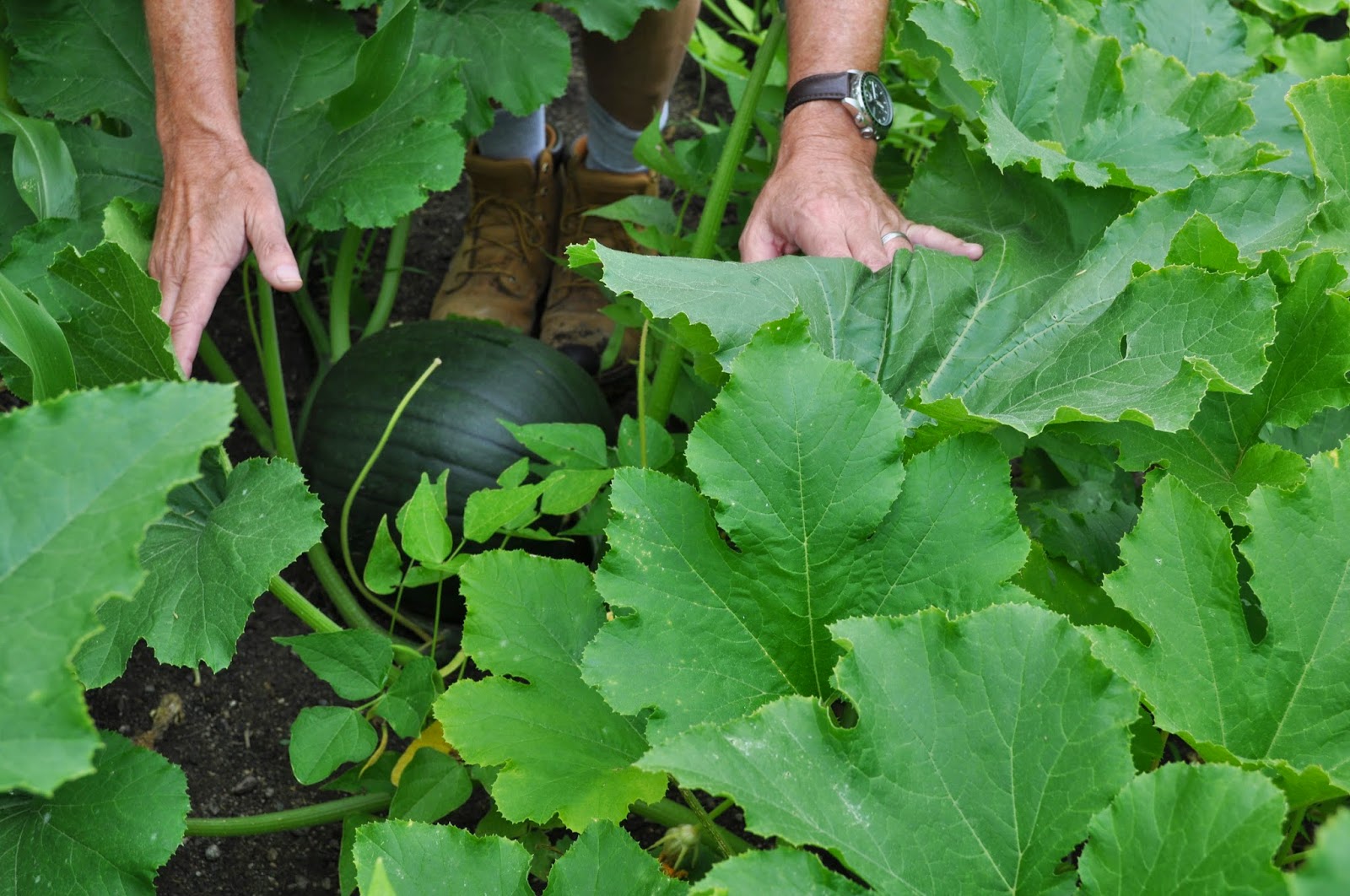 It turns out it was a big mistake to plant bush beans anywhere near the squash. But they are doing all right where they aren't being out-competed.

And the corn is so tall! (Spot the loony) 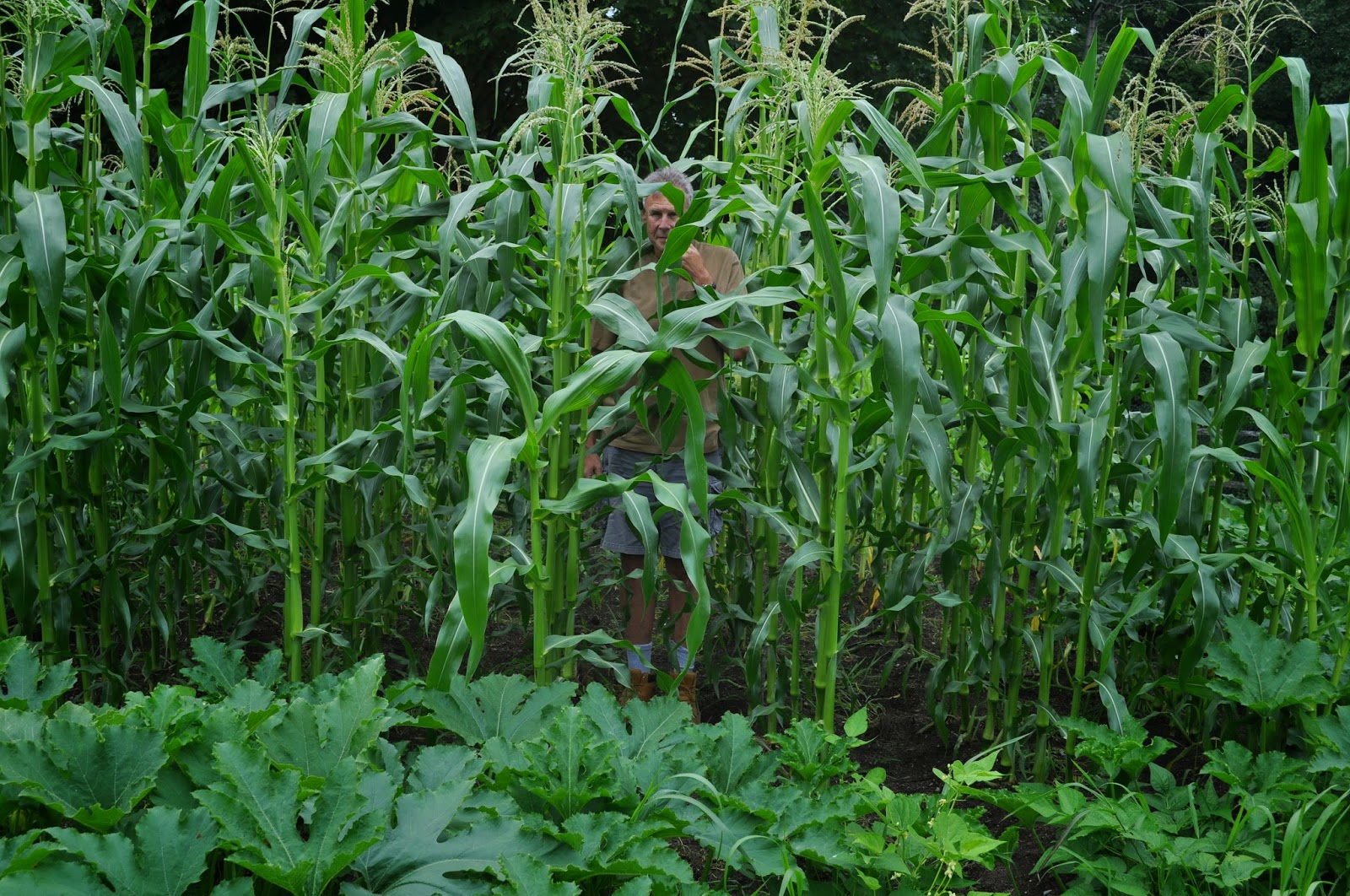 Last week I weeded the corn and left the weeds as mulch. Turns out to have been a mistake, as we got a fair amount of rain and they promptly re-rooted themselves. So I weeded again. No pictures; a 6'4", 137-year-old man on his hands and knees getting showered with corn pollen is not a pretty sight!

I leave you with a picture of this guy, happily chewing on some chard. I don't know what he is (other than not a Japanese beetle). I wonder if he's the same guy destroying all my perennials? But he was too pretty to squish. 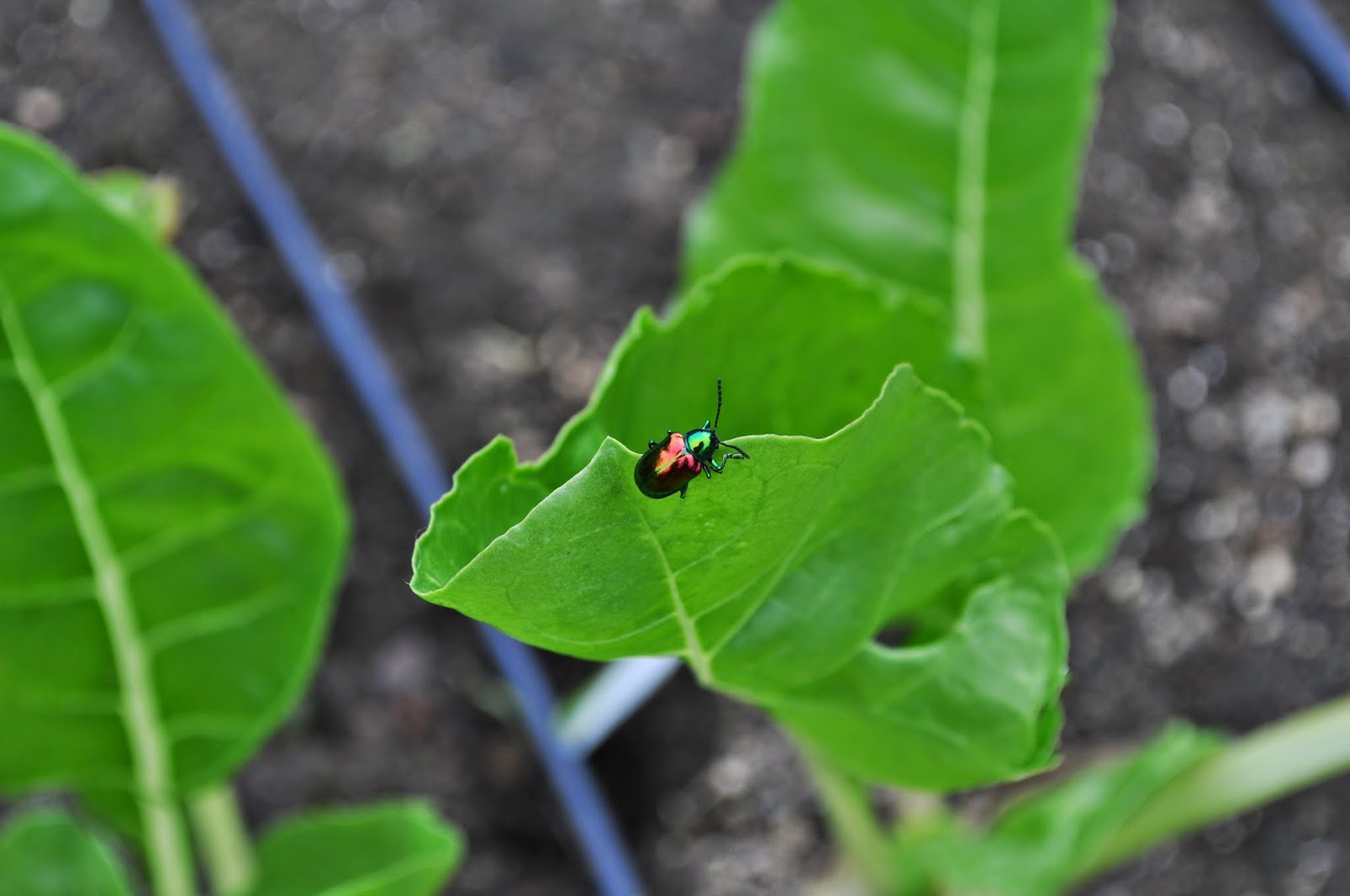 Not so fortunate were these squash bugs, caught in the act and dying for it. 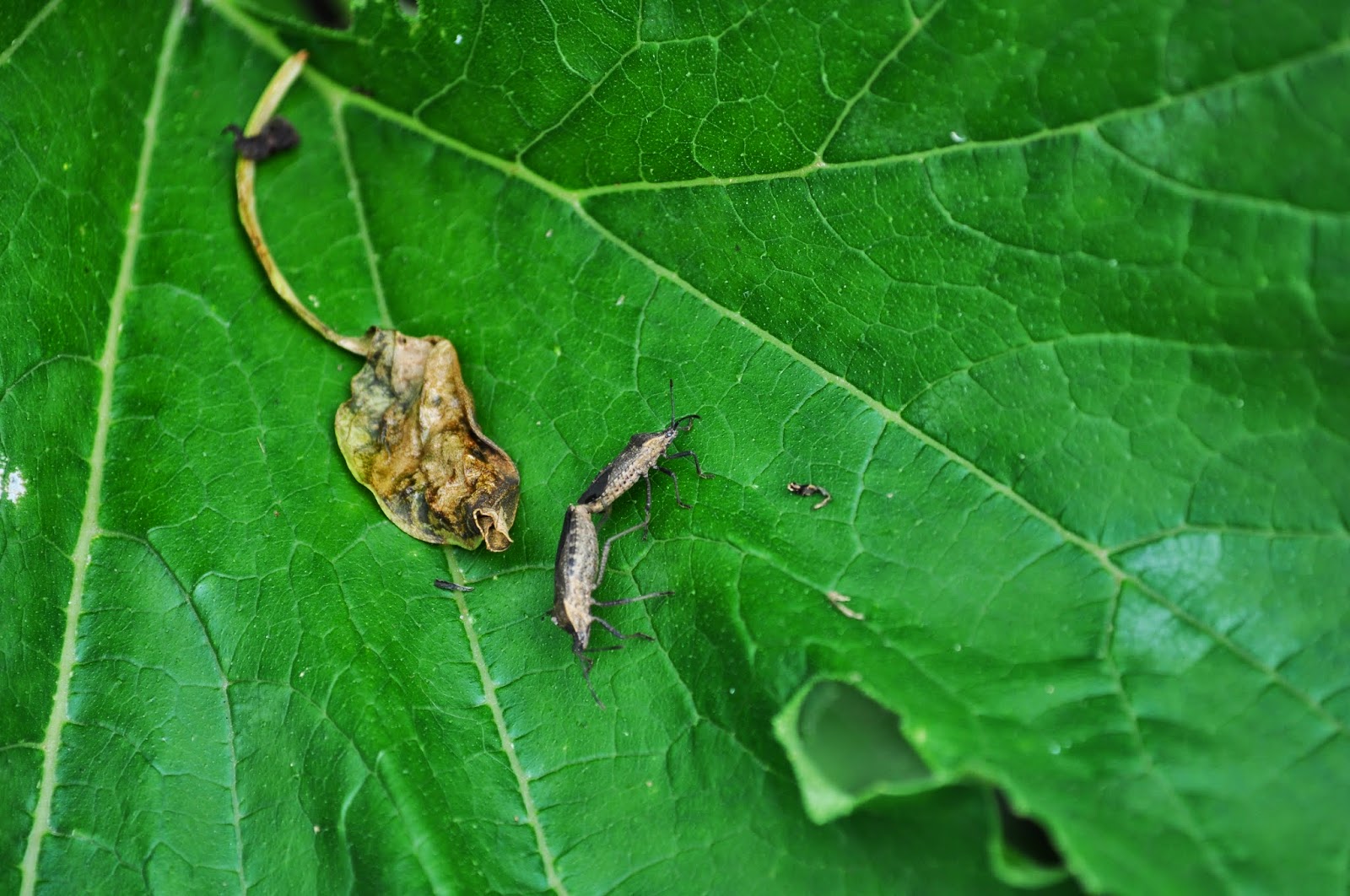 Thanks for reading, and happy harvests to all!
Posted by Eight Gate Farm NH