Hello again from Eight Gate Farm. We are still getting some “first harvests of the year,” and I’ll lead off with them as usual.

I cut two Yokohama winter squash. It was hard to know if they were ready, as online pictures of them show a variety of colors in mature fruit. The larger one in the picture below was about three and a half pounds. I think they’re really pretty.

I also picked our entire crop of pears. As I’ve said before, the trees have always been struggling, but it’s nice to get some every year anyway (if the deer don’t get them first).

The Kitchen Goddess came back from the community garden with a nice haul of sweet potatoes, over 33 pounds. It was pretty early to pick them, but a rabbit had broken in and ate all the foliage.

Eight or nine years ago I planted a tiny hop plant along the back fence of the garden. Fast forward, and the vine has taken over the entire fence, producing thousands of hops. I used to make beer with them, but with my newly-diagnosed gluten allergy, that’s no longer a good thing. A few years ago we added some hops to a batch of hard apple cider, and the result was very good. Since it looks like we will have a bumper crop of late-maturing apples this year, I picked a basket full to dry and get ready for cider-making.

Here’s the vines after picking. You can’t really tell if any were taken, that’s how much hops we have. And to think I nearly planted two more vines awhile ago. I’m glad I thought better of it.

In continuing harvests, the biggest was another cutting of winter squash. At the top is the hybrid butternut “Hunter,” then the hybrid spaghetti squash “Sugaretti,” then another hybrid butternut called “Butterscotch.” Also, there’s a lone yellow conventional spaghetti.

We have not tried any of the squash, but we gave a Sugaretti to TKG’s mother. She liked so much she asked for another. She had to use a saw to get into them. I guess that bodes well for winter storage.

The beefsteak tomatoes are still going strong. Here’s a mid-week picking. I’m holding one of the Pineapple tomatoes. Their unusual flavor is growing on me, but I still haven’t decided if I like them completely. The one plant sure does produce a lot though.

I did another picking of carrots, and they are still looking and tasting good.

Our fall raspberries are starting to produce heavily.

I’ve been picking a lot of Yellow Pear tomatoes. They are tasty, but unfortunately very prone to splitting. I took a bunch of the accumulated ones and made an interesting salsa fresca, using our own onions and Serrano peppers. It was pleasantly spicy.

There were two tomato canning days last week, using our paste and small slicers. The first was on Monday, resulting in eight pints of thick, rich pasta sauce. 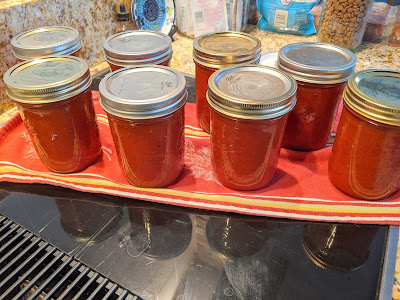 The second one was Sunday, where we canned another 8 pints of pasta sauce, plus nearly a quart for the fridge. After all, with all that spaghetti squash, we need something to top it, right? 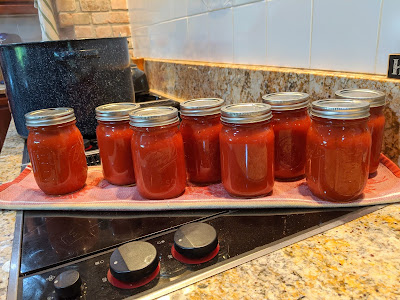 Lastly, TKG made and canned pear sauce (think apple sauce but with pears). These weren’t ours, but she foraged them from two free-for-the-taking trees we discovered. The sauce is excellent.

That’s it for this week. I hope your gardening week was as good as ours. I look forward to reading about them on Harvest Monday, kindly hosted by Dave at HappyAcres.blog.