Here’s another Harvest Monday update from Eight Gate Farm. This past week the weather moderated considerably from the near-freezing lows at the beginning of the week. We escaped any damage here, but two miles away, at the community garden, some of my plants were a little frost-nipped. It must be in a different microclimate.

Last year I bought a generic cayenne pepper plant to replace a plant that had died. I liked the way it grew, producing dozens of thin fruit. I got a lot of red ones, and many more that did not get red-ripe in time, but still made a very useful green chile hot sauce. I saved some seeds. It looks like the plant came up true this year, so it’s probably not a hybrid. I call it “Thin Cayenne” for lack of a better name. It gave me its first ripe fruit this week. 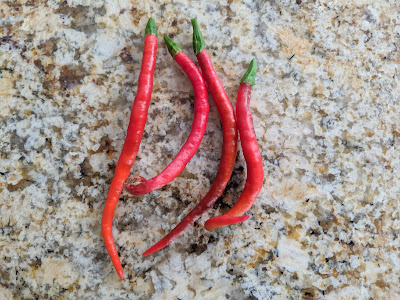 A friend gave me a “Madame Jeanette” pepper plant. This is also called Yellow Suriname. Its heat rivals Habanero. I got the first two ripe ones this week, shown here along with three Habaneros I picked at the same time. I will add the ripe ones to my Habanero sauce, and any remaining green ones to the green sauce. Should give it lots of kick! 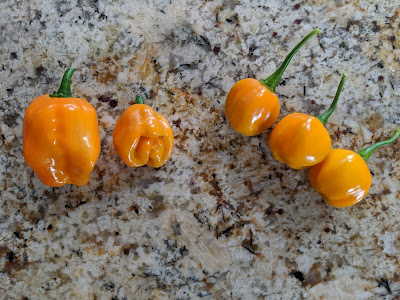 Another first harvest this week was spinach. I heavily sowed four short rows on August 20. It has done well, and these are thinnings.

I picked the last of the shishito peppers, regardless of size. I think having two plants is the right amount. Last year we had four, and that was really too many.

I cut another 20 winter squash. We’ve now been able to try the Hunter butternut, and a couple of the Sugaretti spaghetti squashes. We’re very pleased with them.

The Kitchen Goddess made a really wonderful “Keto Spaghetti Squash Puttanesca.” She added one of our eggplants to the recipe. It was nice to know that everything except the capers and olives came from our garden.

She also oven-dried and ground four of our Alma Paprika peppers.

Here’s a picture of the tomato situation on Saturday. For safety, I’ve been picking them when just a little ripe and finishing them indoors. The fully ripe ones are in front of the “tomato boat.” 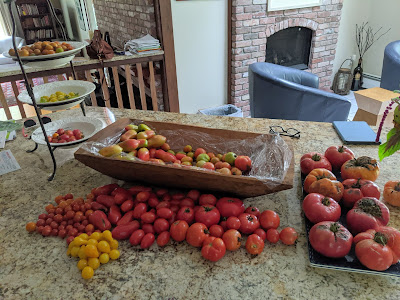 With the small tomatoes, plus four of the beefsteaks, we made tomato paste. It took almost the whole day to simmer down. She put it into three trays that had held ginger paste, a teaspoon per cell. We had enough left over to fill three ice cube trays.

She froze them in the trays, then popped them out and put them into a ziplock bag. This will be very convenient for adding to dishes which require paste.

In wildlife notes, I snapped this picture of two young white-tailed deer. It’s grainy because I took it through a screen. Five seconds later they decided they didn’t like me, and took off like a shot for the woods. A few days later they came back with their mom.

That’s all for this week. Thanks for reading! Please check out all the other Harvest Monday posts at HappyAcres.blog.