Hello again from Eight Gate Farm. As the first day of autumn approaches, the temperatures are dropping rapidly. Last night we got down to 35 F. (~1.7 C.) There was some frost on certain surfaces. So the “first harvests” have a “last gasp of summer” feel to them.

I picked the first Habanero peppers. When I get more to turn orange (hopefully!) I will turn them into a hot sauce. The sauce I made last year was a big hit with a friend when I gave him a bottle.

I picked the first fiery Hot Lemon peppers. If I get enough these too will become a hot sauce.

I picked the first Sungold tomatoes from my hastily-assembled community garden plot. The plant was another gift. It’s nice to have friends that garden! I’ve never grown Sungold before, and am amazed at its productivity.

While it’s been an excellent year for tomatoes and peppers, the same can’t be said about eggplants. My seedlings weren’t up to my usual standards, and once I set them out they suffered a major attack from flea beetles. So what you see here is going to be the bulk of the harvest.

When we first “bought the farm” ten years ago, one of the first things I did was plant a Macoun apple tree. It’s grown beautifully, but never has given us any fruit. Either it blossoms and doesn’t set fruit, or fails to blossom at all. I was seriously thinking about cutting it down or at least severely pruning it. Lo and behold, it gave one apple this year! But it doesn’t fool me.

In continuing harvests, more Anaheim peppers were picked, and thus more chiles rellenos were made.

I picked six big Poblano peppers, and all the remaining jalapenos. These were stuffed and smoked as usual. 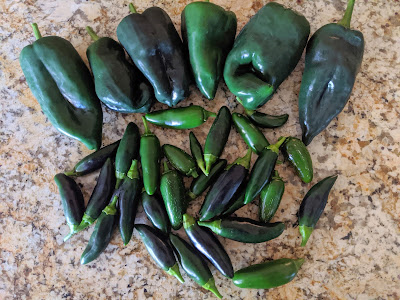 I gathered a nice harvest of sweet peppers. At the top are Jimmy Nardello’s, then Cubanelles, then Cornito Rosso, and at the bottom the delightful seasoning pepper Arroz con Pollo. These were all cut and frozen without blanching. We found that worked great last year.

Our raspberries continue to produce. We are enjoying them in our breakfast smoothies, and even have enough to stock the freezer. 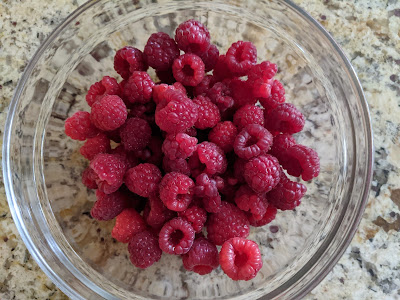 On Sunday we made another batch of really thick pasta sauce. We didn’t have time to can it that day, but I’m guessing there is maybe 5 quarts worth.

I close with a picture of some interesting flowers, "Dreadlocks Amaranth.” The plants self-sowed from last year. The Kitchen Goddess loves them, but I’m a little unsure. Actually I find them kind of creepy. They sure are colorful though.