This week it finally started becoming summer-like. We reached 90 F (38 C) on Friday. This was followed by a short but intense thunderstorm on Saturday night, which not only cooled things off but also flattened my prized flour corn patch. It's a real pain to straighten out the stalks again. Fortunately that was the extent of the damage.

The warmth has jazzed up many of the crops we've had our eyes on. The first broccoli head was harvested. It's Blue Wind, which is always the earliest of the three varieties I grow.

The first small picking of edible-podded peas was achieved. This is something we really look forward to.

Last year I started six caraway plants from seed. They really didn't do much that year, but this year they were among the first plants to emerge in spring, and really took off. Flowers formed very quickly on tall stalks. Tiny pollinators seem to love the small white flowers.

This week the green seeds had plumped-up, so I cut them and will dry them indoors. I sampled a few, and they have the intense nutty flavor I like so much.

It's been the best year for cilantro for us, but they were starting to bolt, so we cut most of the crop, over a pound. I replanted two more short rows in the shadiest bed, hoping they will grow despite summer heat.

Continuing harvests this week were mixed greens and the last of the radishes, slightly woody. 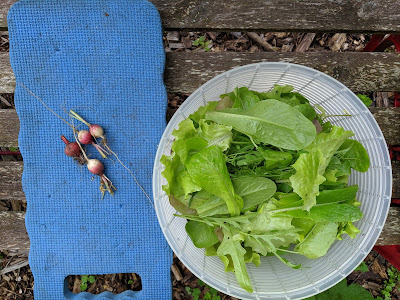 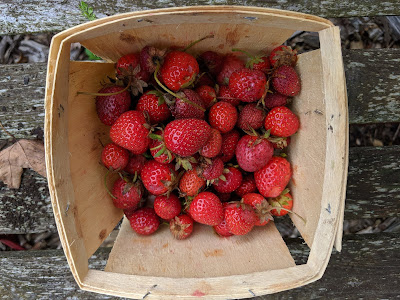 That's the report for this week. Thanks for reading, and as always thanks to Dave at HappyAcres.blog for hosting Harvest Monday.
Posted by Eight Gate Farm NH